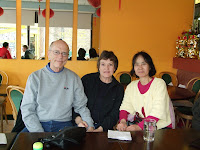 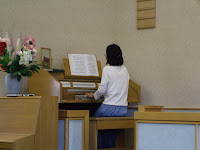 This sweet sister from our ward wanted to "feed the missionaries," but her flat is so small that she invited us to join her for lunch at a restaurant. Along with three young elders, we went to a Chinese Buffet in Walthamstow and had a nice visit with Sister Woon Choa. She is from Hong Kong and has been a member of the Church for several years. She and her sister are the only members of the church from a family of 10. She is the ward organist and plays the piano and the organ for Sacrament meeting and Relief Society. -- 7 March 2009
Touring the Lime 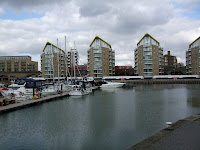 house Cut
A week ago we went for a walk along the "Limehouse Cut", which is a waterway canal that is the gateway to over 2,000 miles of navigable canals. The picture at the left at the beginning of the canal is the Limehouse Basin, which is now a marina for yachts and is overlooked by banks of beautiful modern 'flat' buildings. We walked along the canal through rows of old factory buildings and warehouses that once used the canal to transport materials and finished product. A towpath, where we walked, lines the canal where horses used to pull the barges along the canal. The Limehouse Cut is the first navigable canal constructed in 1766. The name 'Limehouse' came from lime kilns built in the 14th century for lime used in plaster for building 'wattle and daub' walls in early London buildings.
We walked up the canal for about two miles past the "Bow Locks" where Bow Creek joins the Limehouse cut and runs past Three Mills Island. Here is a picture of the Three Mills. 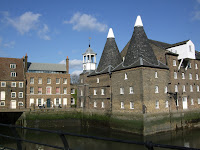 The House Mill, at the far left, is the largest tidal mill in Britain. Next to it is the Millers House with the Clock Mill on the right. The house mill was built in 1776. If you want to see how it worked, click here http://www.housemill.org.uk/mymodel.htm These buildings are now home to Three Mills Films Studios, London's largest film studio.

If you want to see a few pictures of the canal -- a canal boat that people live in -- etc. click on the Limehouse link at the right.

It was a beautiful spring day with 'daffys' beginning to poke out everywhere. Lastly, here's a picture from a 'budding' bush near our flat, a sure sign of spring. 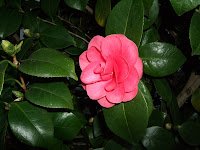 So fun! Love the pics too. Can't wait to talk to you to get the rest of the details. Have a great week. Love you!

I can't believe the interesting things you are seeing. All that history and architecture, and art. Will you be ready to come back to rural Utah?

That is so beautiful and I'm so grateful you guys are getting this experience. Even thought it makes us all miss you! It is wonderful to see and hear all about it. Thanks for the great pictures! Love you

A blog from your mission? Very cool. I just noticed this while perusing Jane's blog and it's nice to see some of your experiences in London.

Hope you are well!

Hendu, and I look at yours because of Jane's. Aren't blogs fun? You look like you are doing well.

Dad & Mom, I love the pictures and the little details about your life. I can't wait to come and experience all of the things you see and do on a daily basis. Love you.