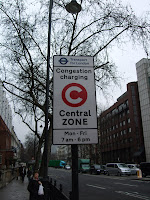 Downtown London's roads are the 2009 version of the original cart and wagon paths of midieval London. The street names, like the towns, counties and parishes are classics like Cheapside, Regent, Oxford, Old Brompton and High Street Kensington. But dirt wagon paths do not a modern city street make, and the city fathers, determined to limit the number of modern automobiles on said paths, have a 'Congestion Zone' that requires a daily payment of £8 to drive therein. This, from all outward appearances, seems to be a small deterrent, because there is a lot of traffic. Cars, big and small, all have large licensce plates that are 'watched' by strategic cameras to make sure no one escapes this charge. It appears to be very effective. Those who miss payment by midnight the following day are subject to a penalty of £120! 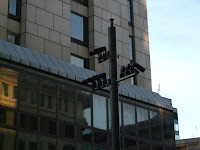 How can they monitor such a vast armada of cars you say? Well here's just one bank of cameras with 'big brother' watching. 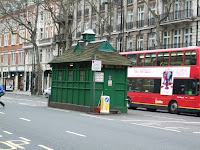 Here are a couple of other related London driving photos. First a picture of a Taxi driver coffee shop that is in the middle of the road and is for taxi drivers only. 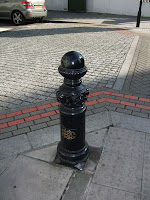 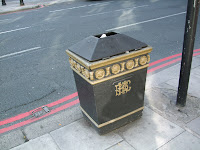 Next is a bollard (a post to keep cars out), a fancy one from our neighborhood in the Royal Borough of Kensington and Chelsea, RBKC for short. Then here's a picture of an RBKC garbage can, also rather fancy. There are street sweepers working seemingly around the clock with a broom and a push cart. RBKC keeps the street very clean.

And lastly a Bobby from the London Metropolitan Police Force. 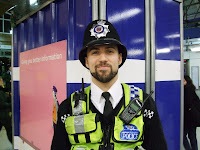 Elder Watts....
PS.. On Thursday we went to see Hampton Court Palace.... see the pictures from link at right.

I don't know how I missed this one. That is interesting to hear about daily life and even see your garbage cans!:) Love you guys!