Every missionary feels that they were called to serve in the best mission in the Church. We do! No one can argue with us, when we declare that we have the best P-days in the world. Monday, September 21st was a special day when we visited the historic and fascinating city of Oxford, and visited some of the thirty eight colleges which comprise Oxford University. It is the oldest surviving university in the English speaking world. Although the exact date of foundation remains unclear, there is evidence of teaching there as far back as the 11th century. There are just over 20,000 students in the colleges that make up Oxford University.

A favorite was Christ Church, which is the largest college and has an Anglican cathedral. The Cathedral is the College Chapel for the College as well as the cathedral church for the Diocese of Oxford. King Henry VIII was the founder of the college. John Wesley is one of the famous people educated here. Another is Charles Dodgson whose pen name is Lewis Carroll. He became friends with the daughters of the Dean of Christ Church - especially Alice. Dodgson made up stories to entertain the sisters and thus was the beginning of "Alice's Adventures in Wonderland" and "Through the Looking Glass."

The Dining Hall Scenes and stone stairways for the first two "Harry Potter" films were filmed at Christ Church. 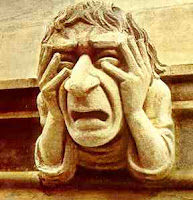 Lot's of humorous gargoyles on all the college buildings. Click on the 'Bored Student' at the left to take a trip with us through Oxford.

How cool - I wish I could have been in your pocket to see all that.

You can be in my pockt anytime If you bring Grace. It was very cool.

Ah so jealous!! You guys do have the best Pdays ever. Wish I could come visit again.

Wow, so amazing. Thanks for the pictures. I bet you are dripping history after going there.

I can't stand it I'm so envious. Do you have a place, if I came to stay, before you have to leave?